Trees company as school kids plant out the Parklands 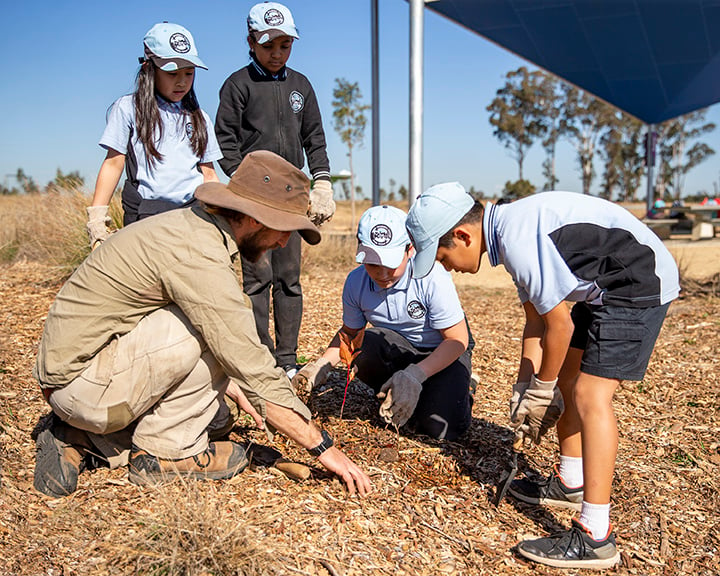 Students from Middleton Grange Public School descended on Bungarribee Park in Doonside to plant a part of the future and celebrate 2018 National Schools Tree Day.

The students were participating in Western Sydney Parklands’ ‘Bringing Back the Bush’ schools planting program.

So far in 2018, more than 800 students from 30 Western Sydney schools have planted around 20,000 native trees, shrubs and wildflowers at planting sites across the Parklands.

Bringing Back the Bush is a free program funded by Western Sydney Parklands, with on-the-ground planting sessions run by well-known environmental educators, Greening Australia. National Schools Tree Day is an annual initiative that reminds children of the importance of nature in their lives. It was held on 27 July 2018.

Bringing Back the Bush is designed to give school children a new perspective on their local environment, because there’s no better way to learn about the environment than heading out into the bush, rolling your sleeves up and getting stuck into planting trees, shrubs or wildflowers.

Since Western Sydney Parklands established its Schools Planting program in 2010, around 20,000 students have planted 100,000 native trees, shrubs and wildflowers. This included the Parklands’ 500 Schools Planting Program, which finished in 2017.

They have played a big role in helping the Parklands restore more than 1,300 hectares of bushland, including hectares of endangered Cumberland Plains Woodlands.

The program offers free transport to and from the planting sessions and a selection of sites in the northern, central and southern Parklands to make it easier for busy teachers and principals to manage.

Each session takes two hours (plus travel time) and involves a safety induction and a short talk on the local environment, before children get stuck into the plantings. All equipment is provided. Schools can book up to two sessions, each with a maximum of 40 children and teachers (for a total of 80 attendees per school).

The planting program for the first half of 2018 was fully subscribed. A second round for 2018 will open again later in the year.

People can stay up-to-date with announcements about the Bringing Back the Bush program by subscribing to Western Sydney Parklands newsletter or following us on Facebook.